Monotypes “Monotypes” is a spontaneously emerging series, spreading like a vine creeper. Whatever is natural and unconstrained, within the space of the subject, becomes visualised in the form of a monotype with biologically textured surfaces. Their subjects are nothing but a prompt for chance which is restrained by the rigour of control. The series is a metaphor of a fight between the random and the planned. It is a metaphor of a fight between nature and reason, of balance between the idea and the actual creation. The starting point here is human being, whose single depiction disappears when confronted with hundreds of other depictions, as similar to one another as leaves of a vine, as a singular human existence in a crowd. Whether a spectator is willing to perceive the series as a whole and create an enormous collage of its single elements or whether he/she prefers to absorb single depictions depends entirely up to them. There are no rules or generally accepted preferences, there is no precise aim or cause. What remains is constant addition of subsequent depictions and the choice… Every monotype of the series is sized 25cm x 35cm. Acrylic on paper.

Your paintings are fantastic ...giovanna colomba

Series: www……pl The series concerns human entanglement in the canons of auto creating notions, their iconographic power of transmission and their constant devaluation. People are situated against the background of blue – the colour associated with the idea of peace, wisdom and gods. Cursor, as the icon of pop culture, is the fixed element of each painting and the only changing element is the composition of the figures on the blue surface. Most of the figures are taken out of the paintings of the great masters of painting. When placed against the background evoking an immediate association with the screen of a computer the figures lose their previous iconographic meaning, becoming a part of new, unexpected possibilities for interpretation. The infinite number of possible compositions is adequate to the possibilities offered to a computer user, where it’s enough to click an icon on the screen to open a number of icons and along with them – an infinite number of different worlds, each guarded by an icon in turn. 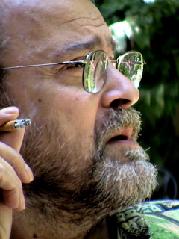 Extremely fascinating work. I like the sculptures in your portfolio as well.

To be madly in love 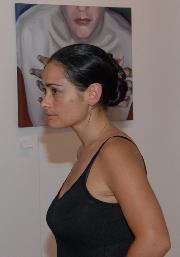 Your scuptures are so good! I can hardly decide on which to comment on. 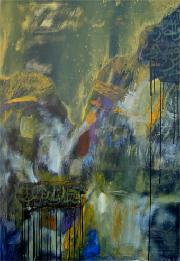 it is an art
thank you 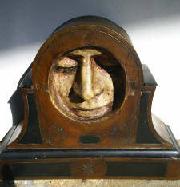 hi mariusz, love your fragmented figures, these two especially and the way they appear disjointed, pieced together using opposing materials.

Hello.
I would like your comments on my sculptures.
I admire your work
Visit my studio log.
giovanna colomba